First published on 22nd June 2020 in the Dhaka Tribune.

The daily headlines make it clear that the world is headed for climate catastrophe, with record heat and wildfires burning much of Australia in the past year. Climate scientists warn that only a decade or two is left to avoid catastrophic global warming of over 2C, which would submerge all low-lying areas under rising seas, creating millions of climate refugees, and endanger global food production, potentially causing huge famines.

Obviously, the world has to stop using fossil fuels, which are the root cause of climate change; Super Fuel: Thorium, The Green Energy Source for the Future by Richard Martin shows a path forward. We might have been already living in an alternate world powered by cheap, safe, and zero-carbon nuclear power if civilian nuclear energy had been allowed to develop freely without military interference.

The terrible accidents of Chernobyl and Fukushima could have been avoided if the safer alternative of thorium-based molten salt reactors had been chosen as the basis of civilian nuclear power. Instead, we still use fossil fuels as our main energy source, and the world remains at dire risk of extreme global warming.

Martin’s book outlines the development of the “light water reactor” design which dominates the world’s nuclear industry, and how this design was driven by military concerns rather than the need for safe nuclear power. The light water reactor was used for the first commercial nuclear reactor at Shippingport, Pennsylvania in 1957, as well as the first Nautilus nuclear submarine of the US Navy in 1958.

The common reactor design was no accident, but the result of development decisions by Admiral Hyman Rickover: In the 1950s, he headed the US naval nuclear submarine research team and also decided as a member of the US Atomic Energy Commission what shape civilian nuclear power would take.

The advantage of the light water reactor was obvious from Rickover’s naval perspective: “The Navy had the best plumbers in the world. They knew how to design and operate pumps, bearings and valves to transport water, including water at the high pressure required for a nuclear reactor inside a submarine” (page 106).

The selection of water as reactor coolant was dangerous, however; it created the possibility of water escaping as high-temperature, high-pressure steam, or even worse reacting with metals in the reactor to release hydrogen gas, which could then cause an explosion. So light water reactors needed large, expensive “containment vessels” to prevent steam or hydrogen explosions from releasing radioactivity into the surroundings. Thus a factor as arbitrary as the US Navy’s comfort with water-based plumbing was decisive in giving the world the inherently unsafe, yet expensive and difficult to build, light water reactor which dominates nuclear power today.

Alvin Weinberg, the head of Oak Ridge National Laboratories in the US and one of the original designers of the light water reactor, identified further safety problems; these reactors were built around a solid core containing uranium “fuel rods” which host the nuclear reactions. Slowing down the nuclear reaction requires a mechanical control system to physically move “control rods” in between the fuel rods. In a light-water reactor, any problem with the mechanical control system can cause the core to overheat and catastrophically melt down.

To solve these issues, Weinberg and his team designed the “molten salt reactor.” As Martin says: “The only truly inherently safe reactor is a liquid-core reactor, like the molten salt reactor that was created at Oak Ridge in the 1960s. For the purposes of a reactor designer, liquid -- whether it’s water, liquid metal, or some type of liquid fluoride [salt] -- has a marvelous characteristic; it expands rapidly when it gets hot … In a liquid core reactor, as the energy of the liquid rises, it expands and naturally slows down the reaction, making a runaway accident nearly impossible … When the reactivity goes down, the reactor is essentially turning itself off”(page 73).

This sort of passive safety (which does not require human or mechanical intervention to slow down the reaction) is missing from the light water reactors which now provide most of the world’s nuclear power.

While thermal expansion of the liquid core of Weinberg’s molten salt reactor provides passive cooling to slow the nuclear reaction, it’s still conceivable for an accident to happen due to unforeseen natural disasters such as earthquakes. However, even in the event of an earthquake or other accidents at a molten-salt reactor, the release of radioactive material into the environment and consequent damage to life and health is almost zero.

“Fluoride [salt]-based liquid fuels have one other characteristic that makes them ideal for reactor cores: They flow. Gravity, not elaborate control systems or so-called passive safety systems, gives liquid fluoride thorium reactors their ultimate protection against a serious nuclear accident. In a power outage or mishap, a specially designed freeze plug in the reactor vessel melts and the liquid core simply drains out of the reactor into an underground shielded container, like a bathtub when the drain plug is pulled. The fission reactions quickly cease, and the fluid cools rapidly … Meltdown is impossible”(page 74).

Again, earlier generations of light water reactors lacked such a passive safety measure to limit the release of radioactivity from nuclear accidents.

Weinberg’s molten salt reactor design had another innovation; it could be run on thorium-based nuclear fuel, which is not as rare as uranium, and consequently promises to be an affordable fuel source for much longer. This is important, as nuclear fuel has to be inexpensive and readily available in the long-term for developing countries which consume increasing amounts of power.

A thorium-based molten salt reactor (also known as Liquid Fluoride Thorium Reactor, or LFTR for short) is also much more efficient with its nuclear fuel, in that it converts almost all of its thorium fuel to uranium-233 and then burns almost all of it. By comparison, a light water reactor utilizes only a tiny percentage of its uranium-235/238 nuclear fuel and so produces many times the volume of nuclear waste.

The nuclear waste produced by thorium molten salt reactors is also much less long-lived. “While LFTRs, like every other nuclear reactor, generate fission products that are highly radioactive, their half-lives tend to be measured in dozens of years, not thousands.” (page 77).

This means thorium-based molten salt reactors will not present the problems of storing radioactive waste for thousands of years that conventional nuclear plants face. In fact, new designs of molten salt reactors are now being researched which could consume existing stocks of radioactive nuclear waste as fuel, thus permanently removing the need for long-term storage of nuclear waste (pages 78-79).

Both these powerful groups opposed further research into alternatives like the safer molten salt reactor. The US government under Nixon short-sightedly terminated funding for Weinberg’s molten salt reactor research. Weinberg’s outspoken criticism of the dangers of the light water reactor design ultimately led him to be fired from his job as head of Oak Ridge National Laboratories. However, disasters at Chernobyl and Fukushima have shown that Weinberg was correct to be apprehensive about the safety of light water reactors.

Disasters at Fukushima and Chernobyl created panic, and have resulted in much public opposition to nuclear energy. This was a colossal mistake in environmental terms, as it has meant that countries like Germany and Japan have been replacing carbon-free nuclear power with yet more fossil fuels.

Many environmentalists also reject nuclear power in favour of wind and solar power; however, these renewable sources are intermittent, and can’t replace continuous fossil fuel-based power without colossal investments in electrical storage batteries which are both commercially and technologically infeasible. Thorium-based molten salt reactors in every country (in fact, in every city) are thus a much more realistic solution to the climate crisis.

The good news is that in the last decade, around a dozen nuclear start-up companies in various countries have emerged, developing new designs based on the thorium molten salt reactor, with considerable research taking place at the government level in India and China as well. Hopefully, thorium molten salt reactors will soon be available to be built in countries like Bangladesh which are acutely vulnerable to global warming and sea-level rise, and desperately need greener, cheaper, and safer alternatives to both fossil fuels and conventional uranium reactors.

One can only hope this happens before our dependence on coal, oil, and gas damages the earth’s climate beyond the capacity for human survival. 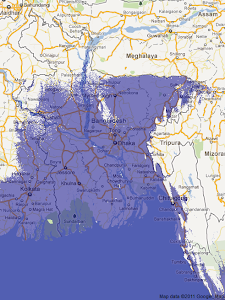 Most of Bangladesh underwater, and over 120 million people displaced